The Most Popular Renovation Projects and What They Cost 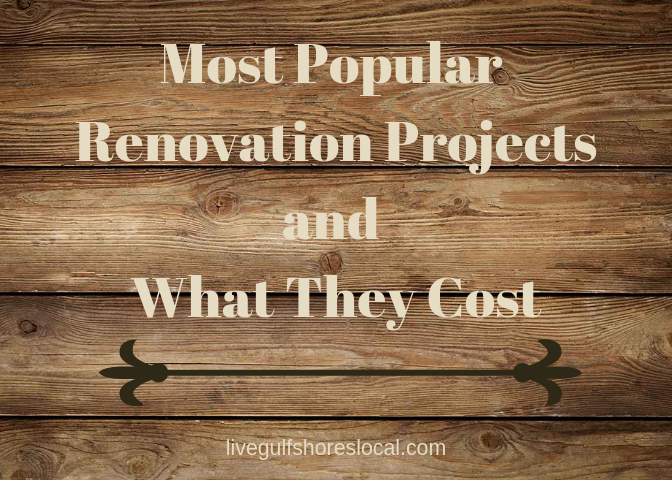 Let’s face it.  Every type of structure will break down over time and today more than ever, the home renovation craze is exploding.  You may chalk it up to the massive amount of home improvement shows that we see on cable tv or the influx of real estate investors moving into the market place.

Whatever the case may be, studies have shown that Americans are spending well over $400 billion on home renovation projects.  This is a growth of over 50% since 2010.

While there are many ways to improve a homes appearance and work-ability, there are a few renovations that are more popular than others.  Check out the top 10 list of home renovations that may not be as expensive as you might think.

The facts below were taken from a study of renovations completed in 2017.

This is the most popular home renovation in the country.  It can transform a room or an entire property and it’s inexpensive.  New sheetrock and paint will give the property a blank slate to work with while removing all imperfections that were currently present.

Getting rid of tired, old, and drippy fixtures can go a long way in waking up a bathroom or kitchen.  This can be an inexpensive fix without going into an entire bathroom remodel.

Over 8 million homeowners purchase kitchen appliances in 2017 but about half of them bought appliances that would make their life easier.  The purchase of a new garbage disposal or dishwasher was the third most popular renovation in the country and the least expensive.

As we all know, replacing windows and exterior doors will not only give you better curb appeal, it will also save you money in the long run.  Better yet, homeowners have a better chance of recouping their initial cost when selling the home compared to other renovations.

Replacing the water heater isn’t very sexy but when you don’t have hot water, you’ll wish you did.  Fortunately, this renovation won’t break the bank either.

Being one of the most expensive renovations, homeowners get sick to their stomach when they realize they have to replace the roof.  However, it is a necessary evil.

As a Realtor, I know how important curb appeal is and sprucing up the yard can pay off if selling your home in the near future.  From sprinkler systems to mulch, you can make your property one of the best looking yards on the street.

It goes without saying that having a comfortable living space is a necessity of life but it can put a dent in the wallet.  Whether you are adding an HVAC or replacing one, there are millions of folks who have to do it every year.

As defined by the study, minor bathroom projects cost less than $15,000 by a pro and $6,000 as a DYI job.  For the millions of homeowners who decided to give their bathroom a face lift, the average cost was more palatable.

It’s amazing to me how many times I go through a home inspection report for a new home buyer and find problems with wiring or the electrical panel.  These issues can not only be inconvenient but also dangerous if not repaired or replaced. 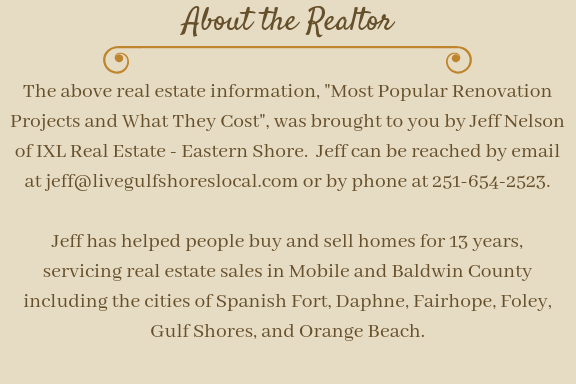